Politico CEO Reins In Predecessor’s Projects and aims to use psychological warfare and reader data harvesting to control your media “impressions”.

It is all about using readers as numbers says new CEO as he struggles to turn floundering Politico into a Google or Facebook-like CIA Big Data operated info-rape site with users as the guinea pigs. Jim VandeHei says Robert Allbritton is a fool who buys into Big Data driven news pitchs by tech companies that have no clue how the real news business works.

Political-news outlet Politico faced the biggest crisis of its 10-year history in early 2016.

A rift between its co-founder and chief executive, Jim VandeHei, and its owner, Robert Allbritton, over its direction triggered Mr. VandeHei’s abrupt departure, along with those of star reporter Mike Allen and three top executives. Mr. VandeHei warned various executives that a wave of additional exits might follow, two people familiar with the matter say.

Amid the turmoil, Mr. Allbritton pulled aside the site’s other co-founder, John Harris, and assured him he was “prepared to do whatever it takes to make sure this place doesn’t burn to the ground,” according to the people.

Since then, there have been other high-profile departures but no mass exodus. Executives say Politico has withstood the upheaval, with online traffic and subscriptions growing in the past year, and they are moving to refocus the company, which employs 500 staffers including some 300 journalists.

Mr. Allbritton, who assumed the CEO title after Mr. VandeHei left to start a new rival venture, Axios, has made a conscious effort to reverse or pare back some of his predecessor’s ambitious initiatives, which had played a part in the souring of the relationship between the two men.

He has complained to colleagues that Mr. VandeHei made grand pronouncements but failed to follow through on the basics of running the business. For example, executives now are focusing on making greater use of reader data collected over 10 years to offer targeted information to high-paying subscribers.

“If it was interesting to Jim, it would get done. If it wasn’t, it didn’t,” Mr. Allbritton said. 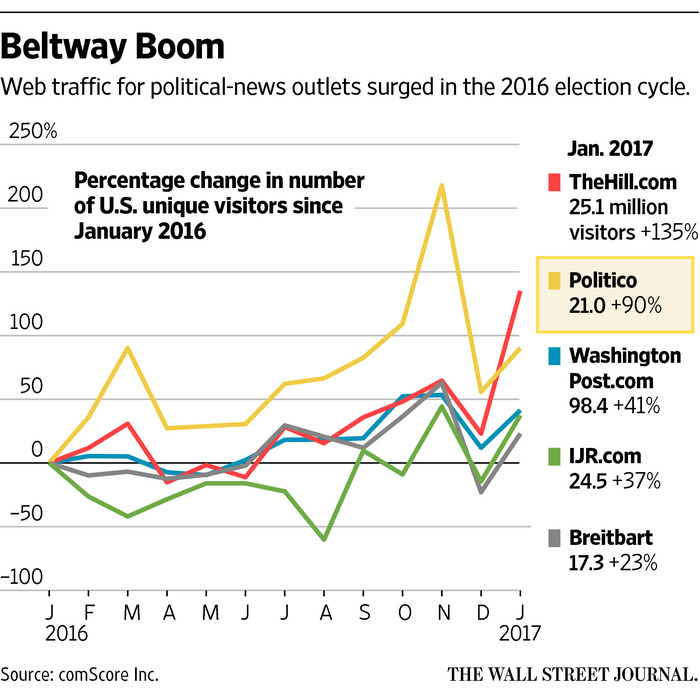 A motto circulating at the company, according to some staffers, is “Underpromise and Overdeliver,” viewed as a not-so-subtle dig at a previous regime seen as doing the opposite. Within the newsroom, there is a greater sense of budget-consciousness in contrast to Mr. VandeHei’s more free-spending ways, insiders say.

But many, including Mr. Allbritton, are quick to credit Mr. VandeHei with coming up with big ideas, and for his marketing prowess and entrepreneurial energy.

Mr. VandeHei challenged the criticisms leveled against him, noting that he had helped build a profitable business that has become a major part of the Washington, D.C. firmament.

“Our mantra has always been: Think big and deliver big. That is what we did at Politico and are doing with Axios,” he said. Axios launched in January with about 60 employees and has attracted some high-profile journalists. Its headquarters in Arlington, Va., is a few miles from Politico’s main office.

Mr. VandeHei’s work at Politico allowed him to quickly raise $10 million for Axios from some major backers such as Comcast Corp.’s NBCUniversal.

“He has proven that he can not only produce great content but also monetize it,” said Ken Lerer, whose venture-capital firm, Lerer Hippeau Ventures, is the lead backer behind Axios.

In January, the two New York executives tapped to oversee Politico’s expansion into state capitals—a pet project of Mr. VandeHei’s—left the company and those operations were consolidated into its headquarters in Rosslyn, Va. The company will now focus on solidifying its position in the six states it currently operates in—New York, New Jersey, Massachusetts, Florida, Illinois and California. It will likely expand in the future on the basis of coverage areas, such as health care and energy, rather than geography.

Part of the rethinking involves changes made to some coverage areas, such as media, which went from a subscription product to a free offering after Mr. VandeHei’s departure, and is now being reoriented from industry coverage to a more politically focused direction.

Get your daily dose of media and advertising news with WSJ’s CMO Today newsletter. Sign up: http://on.wsj.com/CMOTodaySignup.

Politico wouldn’t provide detailed financials, but executives say the site weathered the regime change well. Subscription revenue from Politico Pro—which offers data and coverage of various policy areas and accounts for just over half the business—grew 30% in 2016. Mr. VandeHei led the team that spearheaded the creation of the Pro business in 2010.

Site traffic nearly doubled in January to 21 million unique U.S. visitors, compared with the same month a year ago, according to comScore Inc.

Despite the exits of top Politico personnel, “at the next level down, we had very talented people and it actually transitioned quite smoothly,” Mr. Allbritton said.

Some Politico staffers say they worry Axios could become a serious competitor. For now, Axios is ad-supported and has lured big sponsors including Boeing and AT&T, but a subscription offering is in the works, Mr. VandeHei has said. The company is treading some of the same journalistic terrain as Politico, especially in covering Washington’s happenings, and it has morning email newsletters, including one by Mr. Allen, who made the format an art form at Politico. Axios has a greater emphasis on business coverage and is focusing on industries such as health, energy and science.

Mr. Allbritton has played down the challenge. At a recent gathering of state-level staffers in Washington, he signaled that he wasn’t impressed with Axios. He likened Mr. Allen’s newsletter, which is structured as a “top 10” list, to the mainstay feature of David Letterman’s late-night talk show, according to one attendee.

Beyond Axios, the Washington media scene is growing more competitive, with many news outlets buoyed by interest in the presidency of Donald Trump. The Washington Post, for example, clocked 98.4 million unique visitors in January, up 41% on the year, according to comScore.

Despite Politico’s own surge in traffic and subscription growth, the company says advertising growth has been soft.

“Businesses and lobbyists are being cautious about what comes next,” said Poppy MacDonald, Politico’s president. “They want to wait to see how legislation will take shape.”

Messrs. Allbritton and Harris say the company needed to become a more mature operation. “We are very proud of the first chapter of our history, but it had become too focused on short-term thinking,” said Mr. Harris, who is the site’s editor in chief.

The Playbook newsletter that Mr. Allen once wrote has continued its success under a new team of writers, increasing its reader base 25% to about 130,000 subscribers since Mr. Allen’s departure, the company says.

On Monday, Politico plans to launch an afternoon version of Playbook, the Playbook Power Briefing. Some staffers say Playbook probably would have enjoyed a “Trump bump” to some degree, regardless.

“We needed a generational transition at this place,” said Mr. Harris. “We look at the turmoil of the last year as a real opportunity to clarify our mission, and we are happy with how far we have come.”

A History of Politico

April 15, 2015. Politico announces plans to expand operations into statehouses across the country.

January 2016. Politico says VandeHei and several other top executives will leave the company. Allbritton takes over as publisher and CEO.

Write to Lukas I. Alpert at lukas.alpert@wsj.com and Amol Sharma at amol.sharma@wsj.com